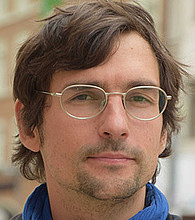 Mag. Dr. phil. Laurin Mackowitz is a university assistant at the Institute for Philosophy at the University of Graz. He received his doctorate in 2017 from the Institute of Philosophy at the University of Innsbruck with a dissertation on political interpretations of the biblical Exodus myth. After completing his doctorate, he worked as a research assistant at the Wirth Institute for Austrian and Central European Studies at the University of Alberta. His research focuses on the imagination, stabilization and transgression of collective identities. His habilitation project questions metaphors of belonging in philosophical discourses about migration and refuge.

Current research project:
Metaphors of membership in philosophical arguments about migration and refuge

Migration and multiculturalism have become an intensely and controversially debated topic of political philosophy in recent years: conditions and restrictions of cosmopolitan rights in a cross-border global order, demands for the inclusion and exclusion of non-nationals as well as obligations regarding hospitality and asylum are based on various conceptual and methodical approaches discussed. Despite these differences, many approaches have one thing in common: the idea of ​​membership, which is at the heart of these debates, is conceptualized through a metaphorical language. Membership metaphors are more than just a main feature of philosophical discourses on migration and multiculturalism: images of domesticity, familiarity and community represent, reflect and structure ideas of social and political relationships. They consequently act as linguistic gatekeepers in philosophical discourses about migration and multiculturalism insofar as they provide the conceptual framework for the redistribution of rights and claims between members and strangers. My research is intended to show how membership metaphors structure arguments through inappropriate and misleading figurations of idealized ideas of belonging and frame what is familiar and what is foreign.


Office hours by appointment- please write me an e-mail.